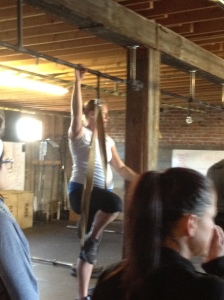 I have been sick the past week or so. According to the news this is one of the worst flu seasons since 2004. After working out Thursday morning and my throat burning I decided the best thing for my body was a few days off. I took Friday off but couldn’t take Saturday off because I wanted to go to CrossFit LoDo to help Emma Grace. Ready about Emma and her tumor here.

Apparently the small amount of “marketing” I saw on Facebook from LoDo spread pretty good because there was a good 25-30 people there for the WOD, if not more, along with CrossFit HQ to take pictures which I assume will make the CrossFit Journal in the coming days. There was a $5 buy-in to take part in the WOD but I figured I could part with $20 to help the little girl.

The picture of the girl breaks my heart because she looks a lot like my little girl. I don’t know what I would do with myself if I found out my little Maggie had a brain tumor…so sad.

My previous best at Grace was 6:39 according to my record on SuprWOD.com (check it out – a cool site to track your CrossFit workouts and metrics). Doing more than one round of Grace AND adding 50 pullups in less than 10 minutes? I was up for the challenge. The record of Grace on SuprWOD was from September 21st and while that was only a few months ago I have seen quite a jump in some areas in a relatively short period of time; I thought I could get through one round of Grace+.

I think I did 11 ground to overhead unbroken to start and new I could get the Grace portion done quickly. I didn’t get a 3 minute mark on Grace (I quickly slowed down after the fast start) but I did complete Grace in 4:10 and cut two and a half minutes off of my best time. The pullups… I cruised through about the first 30 but then really slowed. I had a hard time getting my butterfly timing and even did a few strict simply because my timing was off. By the end of the 50 pullups I had broken them into sets of three. I completed the pullups with just over a minute left in the 10 minute AMRAP. By the time I caught my breath and started back on the ground to overheads again I was only able to get four of them before the clock ran out.

My throat was really burning and in the video below you can hear (and see) me coughing. I am taking Sunday off, too, with plans on hitting it hard tomorrow morning.

84 reps for the WOD was good for me. I know there were plenty of people who did a lot better, including the picture of the girl above. She rocks. She attends the early morning class often and she kills it. So cool to see a pregnant woman taking care of her body and her baby rather than using it as an excuse to eat junk for nine months.

All told LoDo raised over $1,000 for Emma Grace and I hope that small amount helps her live a long life, or at least as long as possible. There were three different heats for the WOD and each heat had about 10-15 folks in it. It was a great time and I cannot wait for the article or whatever might be posted on HQ’s website.