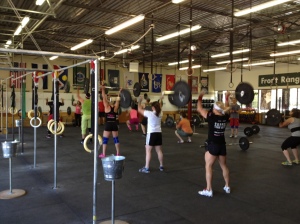 This last weekend was a busy one for me in terms of exercise. I walked seven miles while golfing and carrying my clubs on Friday (don’t mock it until you try it!), did Barbells for Boobs on Saturday and then ran 5 miles in the Cherry Creek Sneak on Sunday. Barbells for Boobs was awesome and Front Range CrossFit did a great job of hosting!

Normally Barbells for Boobs is just one WOD, Grace or one of the girl WODs, but this past weekend there were six WODs scheduled: Elizabeth, Fran, Isabel, Grace, Diane and Karen. With my 5 mile run scheduled for the day following I was only going to do four of the six workouts – skip Diane and Karen. Each workout was scheduled two hours apart to simulate competition. Everyone had to get loose, workout, cool down, rest and then rinse and repeat for the following workouts.

While rowing post-WOD I had a moment of rower envy.

It made for a fun day and at one point I asked the two guys who were doing it with me why we were doing it? After the workout we would sit down and moan and groan. When we tried to get up we were stiff and in pain. I was amazed that I was able to perform each of the workouts due to my soreness and stiffness. More surprisingly was that I not only completed all four workouts but I PR’d in three of them (it was my first attempt at Elizabeth, so I suppose that is a PR, too).

Going into Fran I was a bit nervous because there was still a lot of folks watching and I know how much I hate Fran. The bars for pullups at FRCF are pretty darn thick and it made for trouble for me while doing pullups. I know I can do 15 or so pullups in a row, especially with the butterfly, but on these bars I couldn’t get the rhythm for the butterfly and my grip kept giving out. I completed Fran in 5:39 and originally I thought I had a sub five minute Fran but when I wrote down my time in my black book I realized my best time was actually 5:52.

That is yours truly doing Isabel.

Isabel has always been one of my favorites: 30 snatches for time just sounds fun. I had a goal for a long time to do Isabel in less than 10 minutes at the prescribed weight (135) and it took me a long time to get there. I finally completed Isabel as prescribed in mid-January in about eight minutes. I did it again during the Open (13.1) and did it in about five minutes. This weekend I did it in 3:08! Much improvement!

Finally, I did Grace. Ground to overhead has always been one of my easier movements because all of those years at 24 Hour Fitness included bench press so the presses in CrossFit have been easier for me and by far my strongest movements. I last did Grace in December at LoDo for the Emma Grace benefit and did it in 4:10. After three workouts on Saturday I did Grace in 2:47! Smoked my PR again! 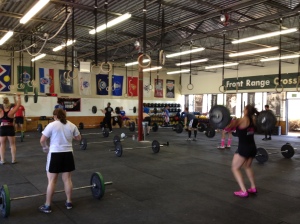 “Grace”. Maher again and Dever (in the pink shoes).

All in all it was a great day. Watching amazing athletes like Becky Conzelman, Jasmine Dever, Colleen Maher and Chris Dozois from FRCF just absolutely murder the WODs was impress. Dozois did Grace in 1:20 and Conzelman did Fran in just under 2 minutes. They’re all beasts.

If you ever get the chance to workout at FRCF I highly recommend it, especially for something like this. People were playing catch, volleyball and basketball between workouts and having a great time. The weather was perfect and the day was great.

The cause was even better.

Here is a video I took of Fran. Dever was doing goblet squats and then running laps instead of Fran. I don’t blame her; anything in better than Fran.